Thanks to Tim, who went to Haiti on a Medical Relief trip with us last week, for sharing some of his experiences. We’re thankful to all of you, for being so generous with your time and gifts. Last week alone, our three medical teams saw over 2,000 patients. If your church or organization is interested in sending a team to Haiti, please email info@410bridge.org. Our need for teams is great, and we’d love to talk about how you can help.

Day 1 We made it! Everything went great going through customs. There was a police officer who was hired by 410 Bridge who came in to help us get through the process. What a relief. Everyone from our team is here. We leave the airport and drive to the 410 Bridge Guest House in Port-au-Prince. We spend a couple hours getting the supplies organized. We have a ton of medicine, bandages, and random medical supplies. The ladies on the trip organized stuff, recategorized it, and then moved it around one more time just because. It was impressive. Seth (the other guy on the trip) and I took a lot of directions and organized duct tape and tarps. We went over some responsibilities and will head up to the mountain and get the clinic ready tomorrow-supposed to be a 7 hour car trip but the road may or may not be washed out. The team is excited and attitudes are great. 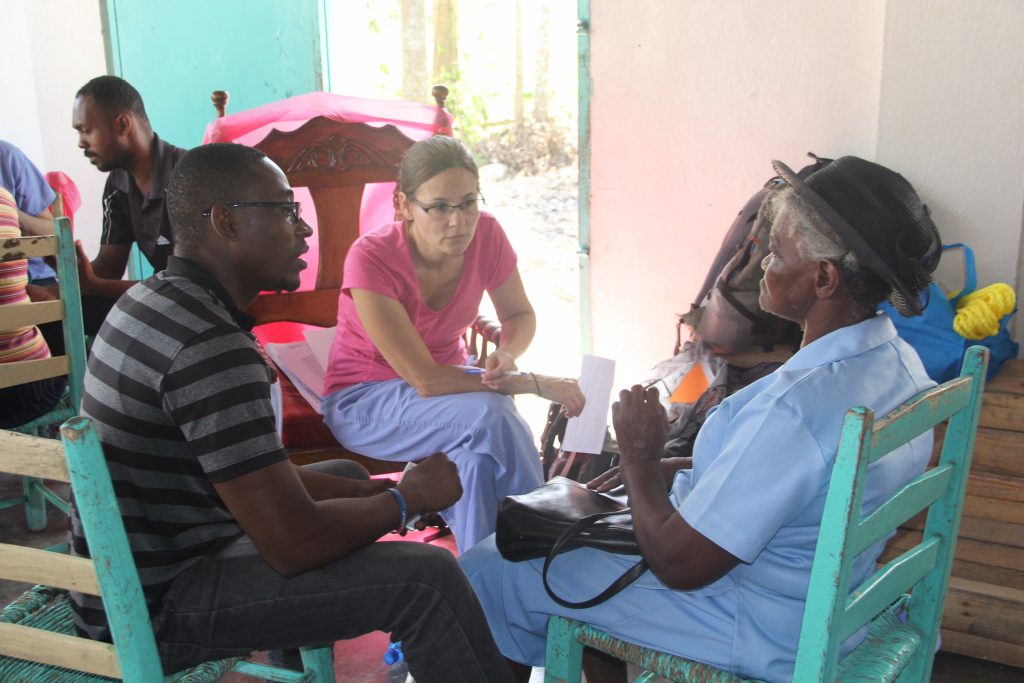 Day 2 Another great day in Haiti. We left Port-au-Prince at 7:30am and arrived in Les Cayes at 3:30. The traffic was really thick at different parts of the journey. Lots of motorcycles with one, two, three, and four people speeding past the trucks that we were in. We saw a lot of damage from the Hurricane as well as huge trees and power lines that were down, sections of houses along the road that were flooded that are unlivable. We did see a bunch of UN trucks and several ministries that were on their way to Les Cayes.

Once we arrived in Les Cayes and dropped our stuff off at the hotel, we went to Maniche (about an hour away) where we were going to set up the clinic. We met with the community leaders and saw the church that we would use as the clinic. Lots of smiles. People were excited to see us. 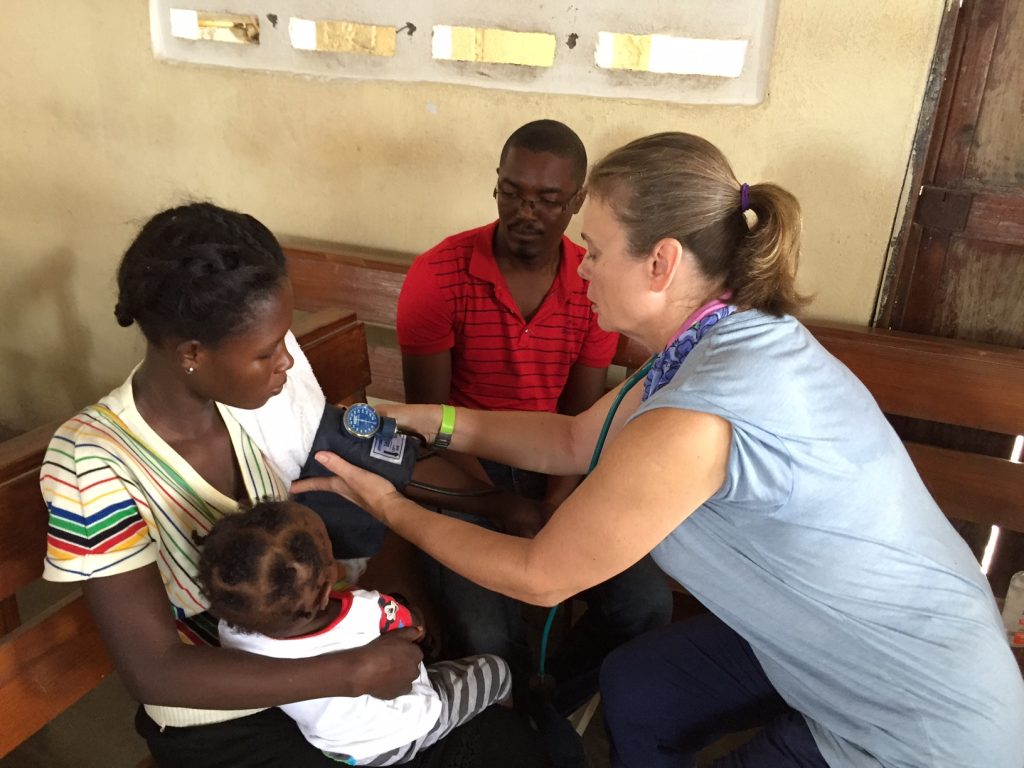 Day 3 Packed the truck, had breakfast, and headed to Maniche. I haven’t talked about the food, but it has been great. The oatmeal and sausage this morning were a highlight. By the way, no wifi at the hotel and the cell service is really sketchy. Power lines are down everywhere from the Hurricane as we travel through Les Cayes. Seems like everything is running on generators.

Once we got to Maniche, we were met by about 400+ people who had shown up for the clinic. Tons of babies and kids. We thought we would have people start outside the church so we could use the church for triage, the docs, and our pharmacy but the plans changed when we saw the crowd. We spent the first hour getting “organized” then starting seeing people. We tried to move people outside but it was a challenge. People kept pressing in and it was tough to maintain any order. 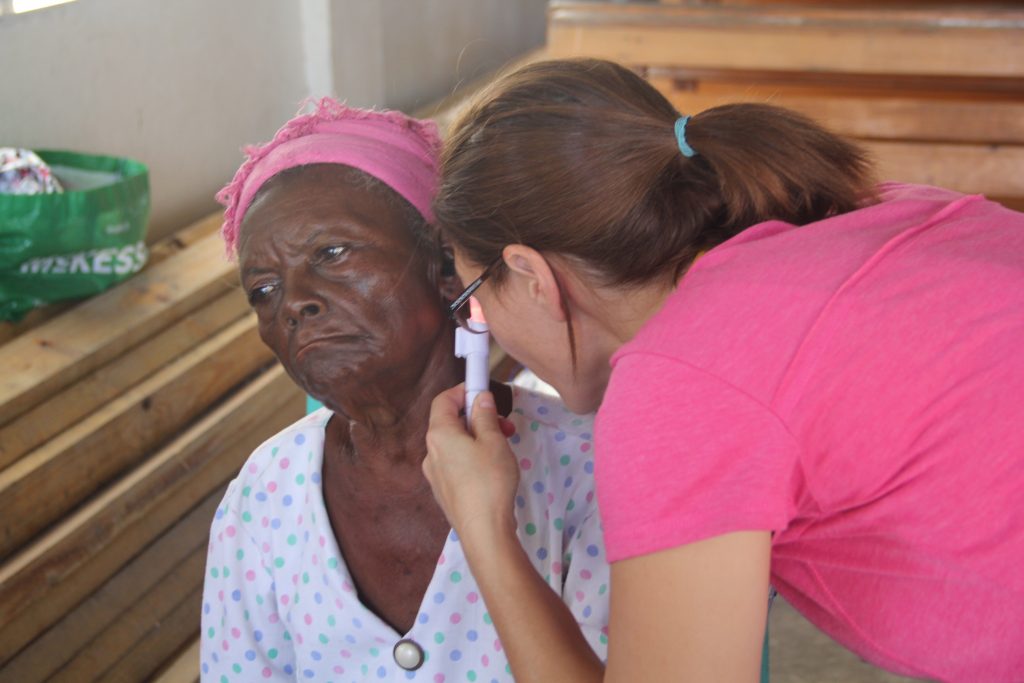 We were able to see over 100 people with all kinds of injuries and ailments. One mom came, dripping with sweat after running with a baby in her arms for over 30 minutes from her house. The grandmother followed shortly after with the baby’s twin brother. The two babies had significant burns from grease or water spilling on them that morning. 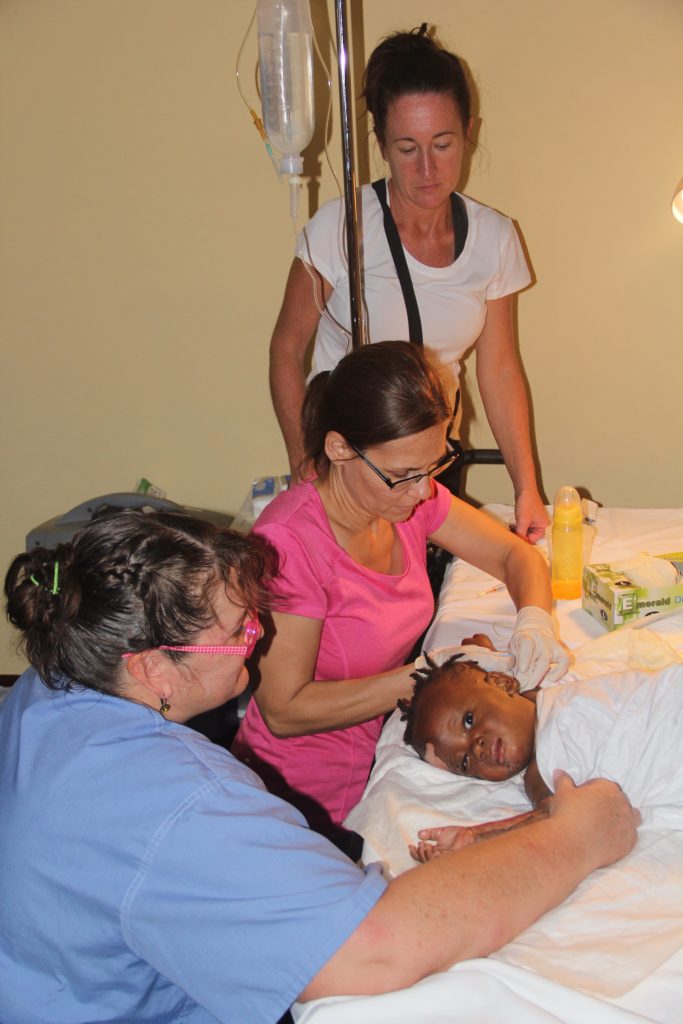 We cleaned and dressed the Wounds and gave them hydration. We ended up taking them to the hospital in town. We had to go to three hospitals before they were finally accepted. 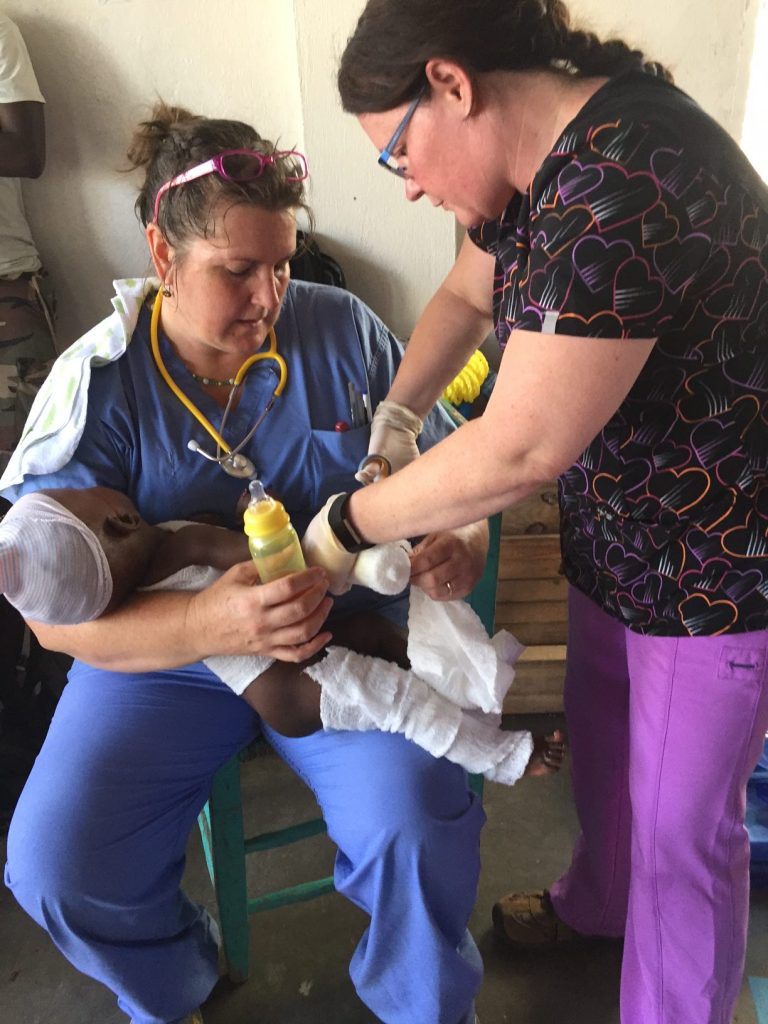 Some of the folks on the team pitched in to pay the $420 for the babies to be treated with IVs and stay at the hospital for two nights. The pediatrician said that one of the babies had a 21% burn and the other 17% surface area burn. The mom had nothing. The babies are back in the village in Maniche now. 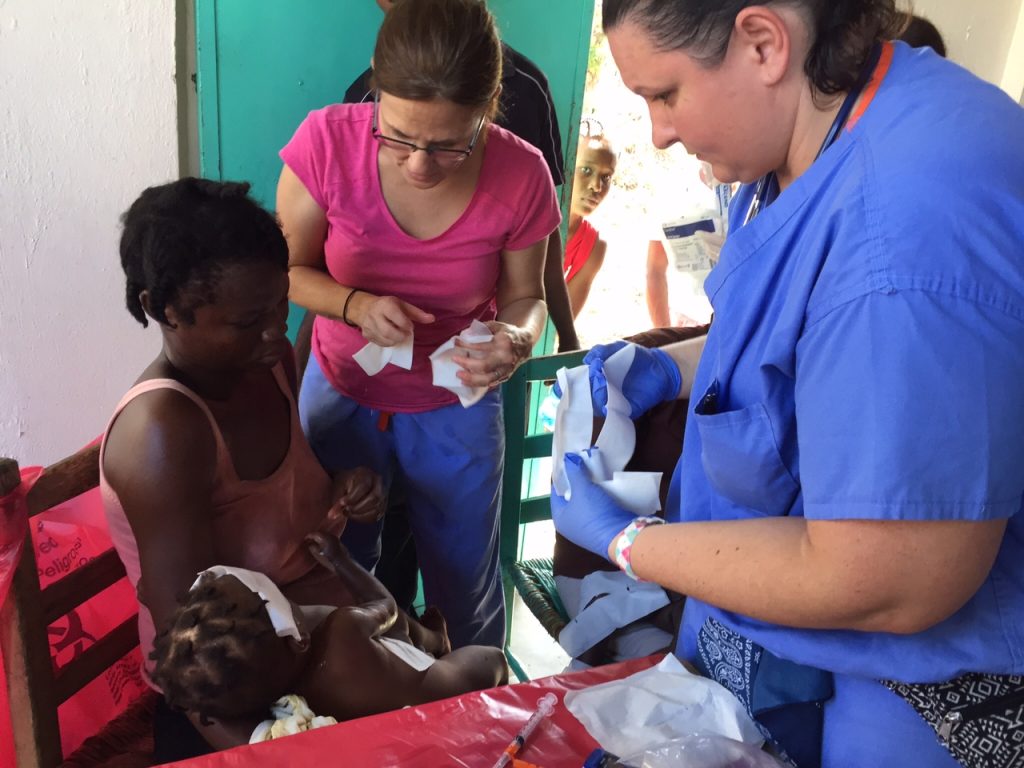 We also saw a guy with an arm tumor that one of Our team members was able to help. There was a terrible thumb injury that we were able to provide some relief for, three cases of cholera, significant malnutrition, and Some PTSD from the hurricane.

Another relief group, Doctors Without Borders, had a cholera clinic set up in Les Cayes that we sent all cholera cases to. Cholera has become a significant issue since the hurricane and is causing dehydration leading to death. The cholera is in the water so the problem will continue to grow until the water is addressed. We do not drink the water in Haiti, but were even more guarded on this trip with the cholera risk.

We left the clinic in Maniche with a lot of folks that we could not get to. We tried to see the people who had urgent medical issues. We did not see as much devastation that was a direct result from the hurricane in Maniche as we thought we would. We had planned on spending both clinic days here, but after some discussion we decided that our time might be better used in a different community that might have more emergent needs. So…off to Kalapa on Day 4. 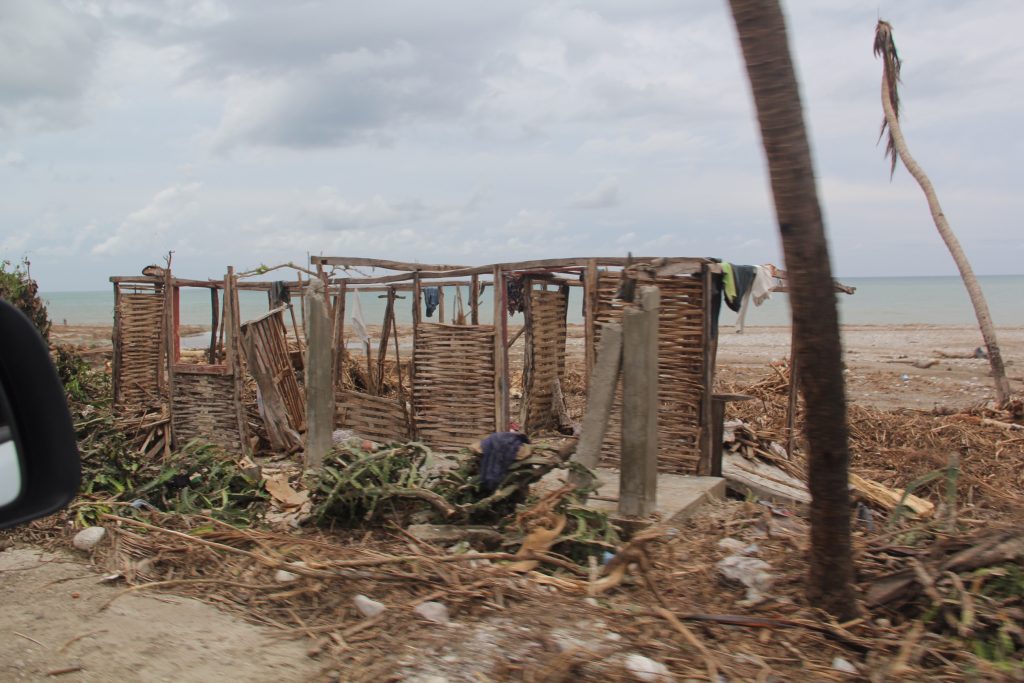 Day 4 The road to Kalapa is tough to put into words. The drive from the hotel took about three hours. We saw devastation like I have never seen before. Hurricane Matthew wiped out whole communities. Trees were snapped in half, homes were leveled, roofs were blown away. The road was not passable until just recently. Debris was littered all over as well as large piles gathered next to the road. Homes, smaller than our living room, were left with one or two or no walls.

Once we got to Kalapa we were met with another crowd. We used a church for the clinic. This time the clinic ran quite a bit more smoothly. We saw some more injuries related to the hurricane and three more cases of cholera. So many babies. 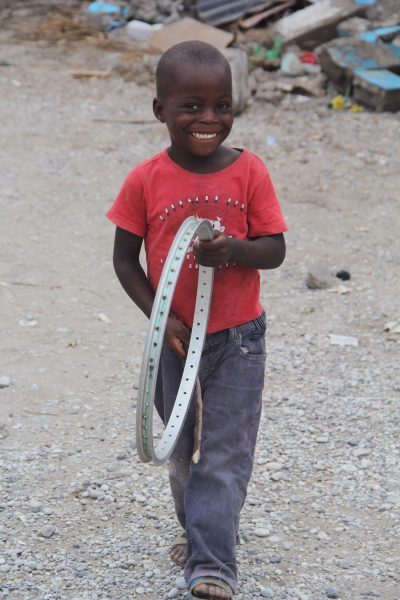 We asked the community leaders to send us the people who were the most sick. One lady came and was shaking, sweating, and vomiting. We put in an IV with antibiotics and something for the vomiting. Not exactly sure what was going on, but her temperature dropped from 104.3 to 101,

There was a large truck with Samaritan’s Purse about 100 yards away that was handing out large blue tarps to cover houses. We saw dozens of houses with tarps on the way up and it there were over 100 people trying to get more. Roofs were missing all over the community.

We saw several sizable open wounds that needed to be cleaned. We did a small surgery to remove a cyst. Several kids had pneumonia. There was an elderly man who was blind that had severe prostate issues that we were able to help. We drained a large abscess on the back of a baby’s head.

The community will be reeling from the hurricane for a long time. We heard of one project through 410 Bridge that was helping the people in Kalapa raise chickens and sell the eggs. The chicken coop and chickens were destroyed during the hurricane and they will need to start over. Water came in from the ocean and leveled homes. All the crops in the community were destroyed so they will need to start completely over. There are two agronomists in the community right now who are helping to provide seed and working with the farmers to educate about seed depth, soil conditions, and most fruitful produce for the area. The rainy season is almost over, so there is urgency to get the seed in the ground to have a harvest when the resources from outside organizations dry up.

The ride back was overwhelming…again. So much devastation. We just missed a demonstration that was about to start. The street at one point was covered in a huge pile of brush and there was a large group about to close the road. Fortunately, they let us through. Every sight seemed like a National Geographic photo opportunity. The motorcycles outnumber the cars by 3:1. We did see one motorcycle with a family of 5…again, on one bike. We made it back, without incident at dinner time. Rice, noodles, cheesy potatoes, and goat for dinner. It was tasty.

Day 5 Time to head back to Port-au-Prince. The ride was long but lots to see. We left at 8:30 and got back in at 4pm. It’s amazing to me that there are no traffic lights. The brave and slightly crazy win at the intersections. Our drivers were impressive. We stayed at a comfortable guest house, sorted the medications, ate, and went to bed. We had hot water this time (super nice). It was a great place.

Day 6 We get up and head to the airport. Great trip. Great team. We had two wonderful American leaders (Dee and Jen) and a great Haitian leader all Week (Wisler). Our team also included 5 translators, a Haitian doctor and nurse, and 3 drivers. Add the eleven of us from the states and there were at least 22 of us involved in the clinics. God did a good work in us on the trip. We learned to better appreciate who He is and depend on Him for our security and provision. The Haitian people helped us understand this. The World is big and God is good.