Here is an update from our Kenya Country Director, Andrew Guuru on the installation of a new water pump in Karima… 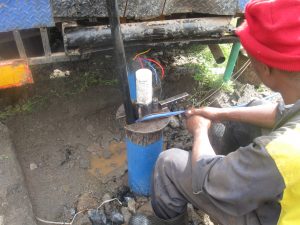 Removal of the old pump.

The re-installation of the water pump at Karima was completed on September 4th. The water out put is huge enough to get to all tanks.  A lot of work had to be done as follows.

-Pulling down of the pump concrete top cover to give way to the removal of the pump.

-Removal of the Meter at the borehole, too weak to withstand huge pressure of the new pump -New one to be bought and installed.

-Removal of the plastic pipes that were used to get water out. They said the pipes were not strong enough to withstand the pressure of the new pump and they were 1.5” and not 2” as was expected and instead they have installed galvanized metal pipes- 2”.

I am waiting for a quotation from the local electrician to know how much the new control switches will cost.

The removed pump is not strong enough to work effectively with a huge output. According to the engineer installing the new one, the other pump can only be good for a domestic use where out put is expected to be less than 8,000 ltrs/hr. This means we shall have to budget for a pump for the Karogoto borehole.