A Picture is Worth a Thousand Smiles 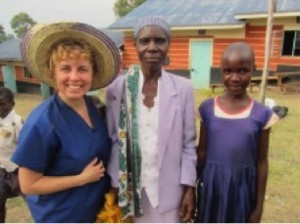 This week, we have a special guest post by one of our child sponsors, who was able to visit her sponsored child in Michura, Kenya.  We hope you are inspired by this incredibly touching story!!!

by Nanci Blackert in Cary, NC

In mid-2012, I signed up for a Medical Mission Trip to Kenya.  It would be my first trip to a third world country and I was nervous, but excited.  As the trip approached, we began telling others in the church community about the village in which we would be providing medical care.  On one particular Sunday, 410 Bridge asked us to try to get sponsorships for some of the children in Kenya.  I was asked to hand out 5×7 Cards.  Each card held a small story and picture of a child that needed sponsorship.  As I gave out the cards, one little girl’s picture caught my attention.  The name on the card read, Millicent.  The little girl had the deepest, most beautiful eyes I had ever seen and on the card I also read that she had ambitions to be a nurse.  I put this particular card in my pocket because as a nurse myself, I knew my family needed to sponsor her.

In July 2013, as we packed for the Medical Mission trip and were notified by 410 Bridge that all team members with sponsored children in the village of Michura would have an opportunity to meet them.  There aren’t words to describe how this news changed the trajectory of the trip because most of us, indeed, sponsor a child in Michura.  We went from being servants to being the recipient of a once in a lifetime blessing, a chance to meet the “child” on our 5×7 cards.

Not even off the bus, the children of Michura were running up to our bus to greet us.  It was a tremendous moment and I tried to soak it in, all the while looking for those beautiful eyes.  The children sang for us and cheered for us as if we were celebrities.  It was surreal.  Once we were in the village, there was a welcome ceremony and at the end of it, I had a few moments to walk around and meet the children that had come with their parents to the ceremony.  It was then that I saw Millicent for the first time.  She was stunning but much shyer than the other children, so I simply said “hello” and that I would see her tomorrow.

The next day 410 Bridge provided time for us to go and meet our sponsored children in their own home.  Millicent, although still very shy, was much more comfortable surrounded by her mom, dad and siblings.  Her parents greeted me as if I was part of their family.  They asked me questions about America and we all took pictures together.  The time spent with her family was invaluable because it allowed us to just be present with one another and I think for that gift, we were all grateful.

We held clinic days in the village for the remaining three days.  Each day, after clinic, Millicent would walk me back to the bus, holding my hand, in silence.  Of course if I asked her a question, she would answer it kindly but when we were together, no words were needed.

On the last day in the village, Millicent’s mother gave me a beautiful basket and hat that she had made. I was extremely touched by her generosity.  She had already given me so much just by accepting me into her family.  Then right before I had to leave for the bus, Millicent placed her hand on my shoulder and for the first time she spoke first.  What she said would forever be etched in my mind.  She said “Mrs. Nanci, will you ever come back to see me”?  Tears rolling down my cheeks, I responded as honestly as I could, “God willing, yes, I will come back to see you.”  She held my hand all the way back to the bus, but truly she will hold my heart forever. I know someday I will return to Michura to see Millicent but until then, I will cherish the letters that she writes.

410 Bridge, THANK YOU for the opportunity to meet the beautiful child behind the face on the 5×7 card.